Similar to last year, 2015 was an excellent year for wood storks (Mycteria americana) nesting in South Carolina. “The number of wood stork nests counted in South Carolina during 2015 (2,496 nests) was only slightly lower compared to 2014 (2,501 nests), the state record” said Christy Hand, S.C. Department of Natural Resources (DNR) Wildlife Biologist. “Chick survival was also very high for the second year in a row.” 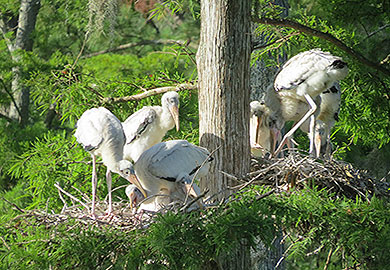 DNR biologists and volunteers monitor nesting success in several index colonies. An average of 2.3 chicks fledged (survived until they were old enough to fly) per nest in the colonies that were monitored. The federal recovery goal for wood storks is an average of 1.5 fledglings per nest. During 2015, storks nested in the following counties: Beaufort (9 colonies), Charleston (4 colonies), Colleton (3 colonies), Georgetown (2 colonies), Bamberg (1 colony), Hampton (1 colony), Horry (1 colony), and Jasper (1 colony).

During 2014, the US Fish & Wildlife Service announced their decision to down-list the federal status of the wood stork from “endangered” to “threatened” because several recovery criteria have been met. As a federally threatened species, the wood stork is still protected under the Endangered Species Act. Details about the reclassification can be found in an online news release from the US Fish & Wildlife Service.

Storks typically nest in trees growing in water or on small islands. Alligators living below stork nests deter raccoons and other mammals from preying upon the stork eggs and chicks. Rain during the months leading up to the nesting season increases the amount of fish and other food that is available to nesting storks. Hand explains that, "Unlike herons and egrets, which hunt visually, wood storks are tactile feeders, which means that they hunt by feeling for fish, crustaceans, and other prey." In order for the storks to nest successfully, prey must be abundant and available throughout their nesting season.

To learn more about wood storks and other wading birds please visit our website.