Approximately 45,000 turkey hunters take to the woods annually in South Carolina with hopes of harvesting a wily gobbler, and the 2015 spring turkey season was no exception.

With an estimated harvest of 15,237 birds, the spring turkey harvest was down about 6 percent from 2014 and down cumulatively 40 percent from the record harvest established in 2002, according to Charles Ruth, DNR Deer and Wild Turkey Program coordinator. This year's decrease in harvest was expected due to the record low reproduction during the summer of 2013.

Each summer during July and August, S.C. Department of Natural Resources (DNR) wildlife 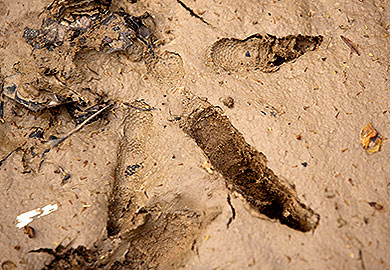 biologists, technicians, conservation officers, and private cooperators participate in an annual turkey observation survey. Reproduction in wild turkeys has generally been poor much of the last decade and the spring harvest following each year of low recruitment has been down. The overall effect has been a significant decline in turkey harvest in recent years. Reproduction during the summer of 2013 was the lowest since the summer reproductive survey began in 1982.

"Since hunters most frequently have success calling and harvesting two-year-old gobblers, it was a given that harvest figures would be down in 2015," said Ruth. Also expected was an increase in the harvest of jakes (juvenile gobblers) with a 36 percent increase compared to 2014. Jakes comprised 16 percent of the total harvest which is the highest proportion of jakes in a number of years. This association between changes in reproduction and its effects on harvest are rather remarkable in South Carolina’s turkey harvest and reproductive data sets. Information on the 2014 Summer Turkey Reproductive Survey can be found on the DNR website.

Top counties for total turkey harvest were Williamsburg, Berkeley, Fairfield, Colleton, and Newberry. However, because counties vary in size, a better method of comparing harvests between counties is the harvest per unit area, for example turkeys harvested per square mile. Using this method top counties were Cherokee, Spartanburg, Pickens, Anderson, and Newberry.

With the elimination of the check-in requirement for turkeys, hunters may wonder how turkey harvest figures are derived now. According to Ruth, “We are now using a post season Turkey Hunter Survey to estimate the harvest and the survey provides a more accurate estimate of the actual total harvest of birds in the state. Check stations worked well in the early years of turkey hunting but they only provided a minimum count of harvested birds. The decision to eliminate the check-in requirement was made due to shortcomings of the system including deterioration of compliance with the check-in requirement, complaints from hunters regarding the inconvenience of check stations, and costs associated with the check station system.”

Other statistics from this year’s survey indicate that there were approximately 44,205 turkey hunters with the average hunter spending about 5 days in the field. Total effort expended by all hunters was approximately 218,258 days in 2015. The success rate was about 26 percent in harvesting at least one gobbler and the week of the season during which the most turkeys were harvested was the first week in April with 35 percent of all birds taken during that single week. Finally, hunter opinion on the turkey population indicated that it was viewed as decreasing and this opinion coincides with the declining harvest and reproductive trends.

Annually, spring turkey hunters contribute more than $30 million in direct expenditures to South Carolina's economy. Results of the 2015 spring turkey season can be found on the DNR website.

For more information on wild turkeys in South Carolina visit the DNR website.