The 2015 seabird nesting season has come to an end and this year S.C. Department of Natural Resources (DNR) wildlife biologists are excited to report high nest numbers and a productive beach bird breeding season.

Nine species of seabirds, including Brown Pelicans, Royal Terns, Sandwich Terns, and Black Skimmers, regularly nest in South Carolina in large colonies of hundreds to thousands of pairs. Each spring and summer, staff biologists survey seabird nests at DNR Seabird Sanctuaries and on federal and private islands to determine statewide nesting trends of these colonial birds. In 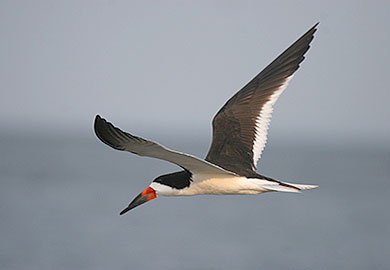 "This summer we had very few storms and no adverse overwash events, which was beneficial for these ground-nesting birds," said DNR biologist Felicia Sanders.

DNR Seabird Sanctuaries such as Deveaux Bank, Bird Key and Crab Bank provide ideal nesting and foraging conditions for these birds, which make their nests on the ground and feed their chicks small fish. Due to the sensitive nature of the colonies, portions of Deveaux Bank and all of Bird Key and Crab Bank are closed to the public from March 15 through Oct. 15 to protect breeding bird nests and their young. The beaches of these islands are now open until next spring. Dogs and camping are prohibited year round on these DNR managed islands.

The 2015 nesting season was especially exciting because Brown Pelicans nested at Bird Key Seabird Sanctuary for the second year in a row. Bird Key, just off of Folly Beach in Charleston County, used to be the largest pelican nesting colony in the state; however, the birds had been absent on the island since 2004. After a 10-year hiatus, Brown Pelicans returned to the island in 2014 with just over 200 nesting pairs. This year, there were over 1,299 pairs of nesting pelicans on Bird Key.

"This summer Pelican adults and young fledglings soaring overhead were noticeable to residents and visitors at Folly Beach and were welcome sight for the town," said staff biologist Janet Thibault.

All of these colonial seabirds are listed as Highest Priority Conservation Status under the South Carolina Comprehensive Wildlife Conservation Strategy. For more information on these coastal birds and the work DNR does for these species, check the DNR Coastal Bird webpage. For additional information, contact Felicia Sanders at SandersF@dnr.sc.gov.