PFC Wes Stewart of Lancaster was awarded the title of statewide S.C. Department of Natural Resources (DNR) wildlife officer of the year for 2015 during ceremonies held Sept. 23, 2015 in Columbia. Five other officers were also honored for their dedication in protecting the state's natural resources through enforcement, education, special investigations, intelligence and records and staff operations.

PFC Stewart started with DNR as a wildlife technician. Eight years later in 2013, he was hired into the Law Enforcement Division assigned to Lancaster County. 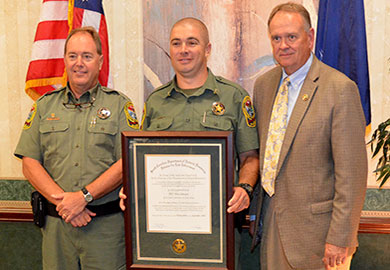 PFC Stewart had 159 cases and 332 warnings for a total of 491 contacts for the year. Officer Stewart has assisted other officers in 106 cases with many being major cases. Those include commercial and recreational nongame device violations, two night hunting, three shining, one rallying waterfowl with use of a boat, three offer for sale of deer parts, dove over bait, two of taking turkey from a public road, trespass to hunt turkey, untagged turkey, antlerless deer violations and countless warnings. Included in those numbers are 283 night patrol hours and 327 boat patrol hours.

The annual officer of the year awards and banquet are dedicated to the late Chief R.M. "Bobby" Gifford, highly regarded chief of natural resources law enforcement for many years. The S.C. Wildlife Officers' Association, the Harry Hampton Memorial Wildlife Fund, the family of Chief Gifford and DNR together honored the state's top officers.

The following were selected as outstanding DNR officers for 2015 from each of the state's four Natural Resources Enforcement Regions and Marine Law Enforcement Investigations and Education and Staff Operations along with the National Association of State Boating Law Administrators (NASBLA) officer. The statewide honor of Officer of the Year was chosen from these candidates:

DNR Officers of the Year, including the statewide title, were selected by a committee of key DNR law enforcement personnel and captains and rated in six categories: employment history; enforcement activities and specialties; awards, achievements and accomplishments; leadership, teamwork and attitude; family and community involvement; and outstanding cases.

Top men and women from across the state are chosen as DNR Officers of the Year because of their exceptional abilities in natural resources enforcement. Before assuming their duties, new officers must complete an eight-week course at the Criminal Justice Academy plus an additional five weeks of intensive DNR field training.