October 30, 2015Motorists need to watch for deer on state roads

Motorists throughout the state need to be constantly aware of roaming white-tailed deer, according to a state deer biologist.

Despite a persistent rumor, neither the S.C. Department of Natural Resources (DNR) nor any other state agency will compensate motorists for injuries or damages resulting from deer collisions. Besides practicing safe and defensive driving techniques, each motorist should carry adequate collision and comprehensive insurance.

“As the human population increases and more people move to the country, which increases commuting traffic, increases in deer-human encounters should be expected,” said Charles Ruth, DNR Deer/Turkey Program coordinator. 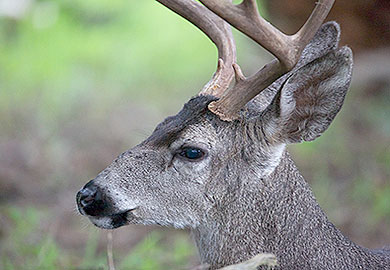 “Sound deer management through regulated annual harvests is the most effective way of curtailing deer-vehicle collisions,” Ruth said, “but following some common sense rules for driving defensively in deer country will make the trip safer.”

White-tailed deer are masters at evading predators, according to Ruth. However, these same predator-avoidance instincts often cause deer to bolt in front of oncoming vehicles.

When deer are sighted well ahead of the vehicle, Ruth recommends sounding the horn several times, flicking headlights (if no oncoming traffic is present) and reducing the vehicle’s speed. If deer are sighted only a short distance in front of the vehicle, these same collision-avoidance techniques - horn and flicking lights - may spook the deer into running across the road, thereby increasing the likelihood of a collision, so in that case it’s best to just slow down.

Always anticipate another deer if you see one or more crossing the highway and do not expect the deer to get out of the way. Fortunately, deer-vehicle collisions typically involve damage to the vehicle rather than human injuries. Most serious injuries occur when the motorist loses control of the vehicle and hits an immovable object like a tree or embankment while attempting high risk maneuvers to avoid a deer. If a collision with a deer is imminent, it is best to hit the deer rather than risk losing control of the vehicle.

Motorists should understand that deer-crossing signs - diamond-shaped signs bearing the silhouette of a deer - mark a stretch of road where deer have been hit previously, however, these signs do not mark specific deer trails. Deer may frequently cross for several miles where the signs are posted. Studies show that about 45 percent of deer-vehicle collisions occur in roughly a 60-day period that corresponds with the deer-breeding season. In South Carolina, the deer-breeding season, or “rut,” is generally during the months of October and November.

Deer movements - and vehicle collisions - are at their peak during the breeding season in October and November. Also, most vehicle collisions occur near sun-up and sun-down because deer tend to move more during these times. Unfortunately, these are also the times that most people commute to work in their vehicles.

Rural or secondary roads rank highest in deer-vehicle accidents because of the frequent curves and narrow shoulders. Motorists often have little warning and therefore limited reaction time when they see deer.

South Carolina’s deer population peaked in the late 1990’s as did the number of deer vehicle collisions. Fortunately, thanks to efforts by hunters in addressing the increasing population deer numbers have moderated since 2000 and the statewide population is estimated to be about 30 percent less now than at the turn of the century.

What should motorists do if they hit a deer? “Report the incident to the state Highway Patrol or local law enforcement and to your insurance company,” Ruth said. Finally, many people wonder if they can keep the deer for consumption. This is not a problem as long as there is an incident report demonstrating that the deer was killed by a vehicle and not illegally shot.