Blue skies, high spirits and a gallon bag of boiled peanuts made for a successful afternoon last week as a group of onlookers watched the Susan Richards disappear below calm seas. 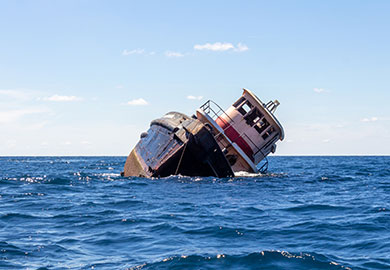 After several weeks of delays caused by poor offshore weather, the retired tugboat will now spend the rest of her days 120 feet underwater as part of artificial reef site PA-17, the Vermilion Reef. The Vermilion Reef is an unmarked reef site 30 miles off the coast of Georgetown and the deepest of SCDNR’s permitted public fishing reefs.

The namesake of the reef site is an ex-U.S. Navy troop transport ship – the 460-foot Vermilion – that was joined over the years by New York City subway cars and now a 95-foot tugboat. Deepwater reefs like this are home to a wide variety of fish, including numerous snapper and grouper species, jacks, triggerfish and even Spanish hogfish.

“The Vermilion Reef has always been an extremely interesting reef site with a tremendous diversity of both fish and invertebrates," said artificial reef coordinator Robert Martore. "The addition of a vessel of this size will add to that diversity.”

The sinking of the Susan Richards was funded in part by the Coastal Conservation Association of South Carolina (CCA-SC) and in part by funds provided through the purchase of saltwater fishing licenses. This represents the ninth major reef project SCDNR staff have completed with CCA-SC.

“CCA-SC has been invaluable in helping us obtain vessels like this,” Martore said.

Artificial reefs play a similar role in the ocean as coral reefs, which cannot grow in the temperate waters off the coast of South Carolina. These human-built structures are typically placed on areas of seafloor with little natural relief, improving habitat and spawning grounds for a diverse array of fish and marine life – and in turn attracting recreational divers and anglers. 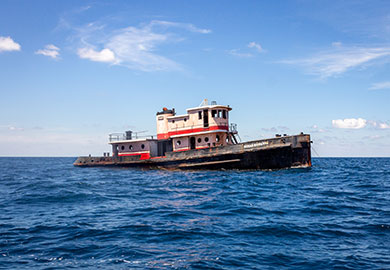 SCDNR has been constructing artificial reefs to improve offshore fish populations and recreational opportunities for over forty years, sinking everything from bridge spans to military vehicles to subway cars. The environmental benefits of artificial reefs are twofold, as they recycle materials that would otherwise be destined for landfills in addition to expanding critical habitat for offshore fish. Structures intended for artificial reefs undergo a long and rigorous cleaning process to ensure they’re safe to sink.

South Carolina is home to dozens of artificial reef sites, the location data for which are free to download to your marine GPS device.