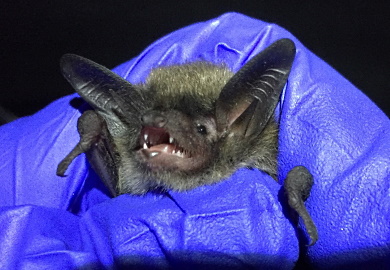 This year marked the first time pregnant Northern long-eared bats have ever been captured on the South Carolina Coastal Plain.

The Northern long-eared bat is a federally threatened species due to 90-100% mortality and dramatic population declines from White-nose Syndrome (WNS).

A total of 33 Northern long-eared bats have been netted in the S.C. coastal plain in the past three years thanks to the people and organizations working to understand this species’ distribution and habitat use in the state.

In 2016, Northern long-eared bats were first discovered on the coast in fall at Palmetto Bluff Conservancy in Beaufort County with one adult male and one juvenile female.

At Francis Marion National Forest in 2017, they were found breeding in Charleston and Berkeley counties.

By 2018, a total of 20 individuals had been captured at Francis Marion National Forest and included all sex and age classes except pregnant females.

Building on these discoveries, SCDNR staff has captured a total of eight Northern long-eared bats in the past two years at Santee Coastal Reserve: three pregnant females, three adult males, one juvenile male and one juvenile female. 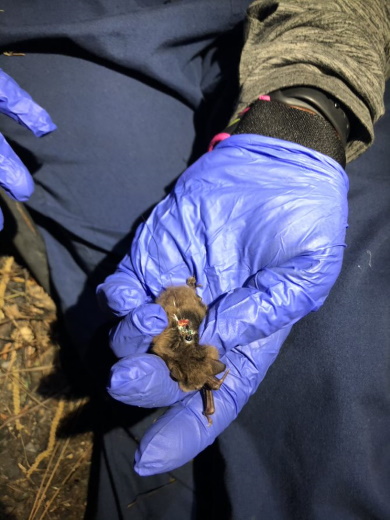 Transmitter placed on captured Northern long-eared bat before being released.

During the netting project this summer, myself and technician Alex Beaulieu tracked two of the pregnant females to eight roost sites at Santee Coastal Reserve. These roosts were all under live bark in sun exposed, 50-ft tall longleaf pine within greater stands of uniform age longleaf pine. These females were found to switch roosts daily, and distances between the previous roost varied between 5 and 1,500 feet. Only one roost tree was used twice.

We had hoped to track these females to maternity roosts, which are often found in tree cavities where pregnant females congregate to share heat and give birth to their pups, but interestingly, these individuals preferred to roost alone or with only one other bat.

Since different types of warm sites may be chosen to maximize the growth of their pups, roosting under sun-exposed pine bark seems to provide the heat they need.

We also noticed habitat at capture sites varied greatly from day roosts. Pregnant females were captured at night in closed canopy maritime forest but tracked to day roosts in longleaf pine ecosystems about a mile away from the capture site. It appeared the capture sites were primarily foraging areas. While netting in closed canopy forest for more bats, we heard nearby transmitter signals from pregnant females we had captured on previous nights and knew they were coming back to the area from their longleaf pine roosts.

Longleaf pine stands at Santee Coastal Reserve are managed with frequent fire for local populations of endangered Red-cockaded woodpeckers. Longleaf pines are themselves considered a species of concern by the S.C. Heritage Trust Program, and efforts have been underway to restore and manage this unique ecosystem. It’s unknown how fire plays a role for these coastal populations of Northern long-eared bats, especially during the pup season. 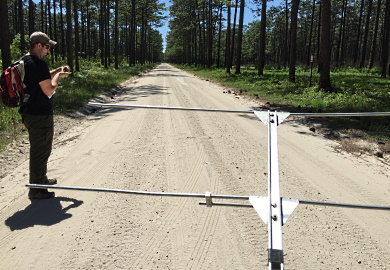 The other major finding was that these S.C. coastal populations of Northern Long-eared bats are outside the June 1 – July 31 pup season outlined in the current 4(d) rule.

According to the USFWS, “For the northern long-eared bat, the 4(d) rule tailors protections to areas affected by white-nose syndrome during the bat’s most sensitive life stages. The rule is designed to protect the bat while minimizing regulatory requirements for landowners, land managers, government agencies and others within the species’ range.”

It takes at least three weeks for the young to begin to fly, meaning those individuals were born no later than mid-May. Finding heavily pregnant females in late April at Santee Coastal Reserve suggests pups are likely born there in early May. 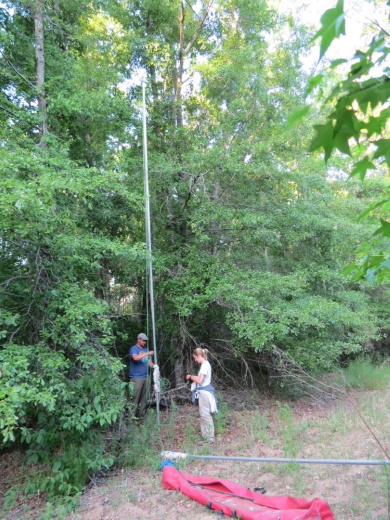 Setting up mist nets on a pulley system to capture bats.

In the past, survey records only confirmed the presence of Northern long-eared bats in the mountains of South Carolina. As can be expected, roosting habitat in the mountains vary greatly from those in the coastal plain. Upstate roosts included mature mixed hardwood forest, mature Virginia pine stands, hemlock forest and mixed pine-hardwood less than 15 years old.

Sadly, since WNS was first confirmed in S.C. in 2013, Northern long-eared bat records in the Upstate have become almost nonexistent despite similar survey efforts from the past.

Thirty-three records of Northern long-eared bats on the S.C. coast in the past three years is positive news in comparison.

The fungus that causes WNS attacks bats while they’re hibernating and causes starvation, so if populations of Northern long-eared bats can forage on South Carolina’s warm coast during winter, their mortality from WNS could be greatly reduced. Understanding the extent, habitat use, maternity colony locations, and timing of pups for coastal populations will help inform management for this WNS-affected species in coastal areas where they seem to be surviving thus far.