The shrimp season typically opens in mid to late May after the peak spawning period of white shrimp has occurred. The unusually cool spring this year has resulted in slower growth and development than normal, resulting in slightly delayed spawning, but shrimp are maturing and actively spawning all along the coast according to Mel Bell, S.C. Department of Natural Resources (DNR) Director of Office of Fisheries Management,

"Although coastal water temperatures, which influence shrimp growth and maturation, have fluctuated through several swings above and below average since a cold snap in January, they finally became more conducive for promoting a good spawn in our near shore waters in recent weeks. Given what we have been seeing in recent monitoring efforts along the coast, it is best to be a little more conservative in opening all legal state waters to trawling this year to provide good results for the spring roe shrimp fishery, and most importantly to ensure we have allowed for adequate spawning that is critical for the success of the fall white shrimp crop." 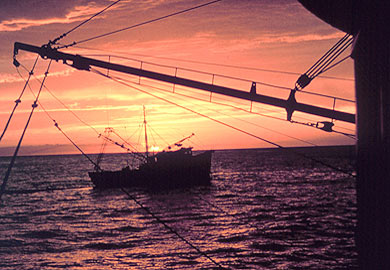 DNR surveys indicate that white shrimp stocks for the year were somewhat below average in 2013, when fall catches by commercial boats were well below average. The extremely wet weather last summer may have contributed to the poor catches later in the year. Rainfall thus far in 2014 is about average.

Total landings for shrimp during the 2013 season, measured heads-off, was just over 1.3 million pounds, which was well below average for the state. Fall white shrimp landings in 2013 were the lowest on record. The numbers of licensed shrimp trawlers to-date as the season opens is 437.

DNR conducts shrimp resource assessments in a number of ways, including fishery dependent and independent monitoring. This allows for fisheries biologists and managers to analyze the resource from trawls conducted by DNR biologists as well as commercial trawlers.

Shrimpers are reminded to contact DNR at tigershrimp@dnr.sc.gov to report catches of Asian tiger shrimp.