There's a terrific opportunity for the entire family to check out the FLW College Fishing National Championship Expo and televised weigh-in in Columbia on April 18. 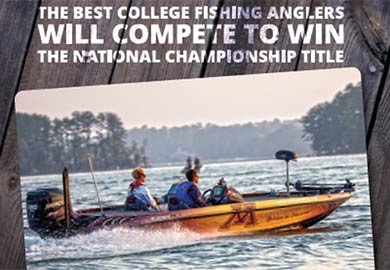 The FLW College Fishing National Championship, presented by Lowrance Insight Genesis College Cup and hosted by Capital City Lake Murray Country, will be held on Lake Murray and the televised final weigh-in will take place Saturday, April 18, at 4 p.m. following the Gamecocks baseball game adjacent to Carolina Stadium on Williams and Wheat streets in Columbia. The tournament will air November 16 at 7 p.m. on the NBC Sports Network with additional airing on WFN and Pursuit. At the weigh-in on Saturday, April 18 free pizza will be served.

The FLW Expo will be held adjacent to Carolina Stadium April 16-17 from 4:30 until 7:30 p.m. and April 18 from 11 a.m. until 1 p.m. The expo includes Ranger boat simulators; interaction with college anglers; games, samples and giveaways; and the opportunity to learn more about fishing your favorite body of water.

These events are completely free and great entertainment for the entire family.