S.C. Department of Natural Resources Investigator Greg Brown was recently named one of two investigators of the year by the International Association of Marine Investigators (IAMI) at a conference in Mobile, Alabama in early March.

The cited case began in April of 2013 when a 28-foot Hydra Sport was reported stolen from a marina on Folly Island. Insurance investigator Louis Harrison and the Folly Island Police Department were contacted in February of 2014 when a matching boat was sighted at a 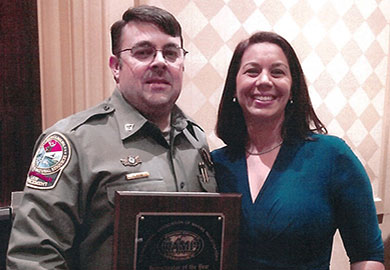 residence on Johns Island. During the initial inspection the titles and registration appeared to be in order and corresponded with the identifiers on the boat and motors, although there were indications they potentially had been altered. The boat also had a number of similar custom-built modifications the owner had described for the insurance claim.

Harrison contacted Investigator Brown the day after inspecting the suspect Hydra Sport, having previously met Brown at an IAMI conference in 2013 at Isle of Palms. The two reviewed photographs of the boat and it became apparent the motor serial number decals by the manufacturer were showing the VOID hologram and the Hull ID Numbers (HIN) appeared to have been altered. The outboard motors were titled as the year 2000 model 225-hp Evinrudes, but they carried the Evinrude E-TEC model engine seal – models that had not been available before 2005. Brown and Harrison were convinced the boat was the one stolen in 2013.

Investigator Brown obtained a search warrant and, along with another DNR officer, returned to the Johns Island home to confirm their findings and seize the stolen vessel. A closer inspection showed the HIN had been altered with the hidden HIN ground off, the freeze plugs on the engines had been tampered with (which also has serial numbers) and even the names on the life jackets had been changed. The serial numbers on the onboard computers confirmed the engines were the ones from the original owner's Hydra Sport. The value of the stolen property was listed as $56,000.

In March of 2014, a Charleston County magistrate signed off on seven arrest warrants for offenses ranging from a felony count for receiving stolen goods with value in excess of $10,000 through two counts of obtaining an outboard motor certificate of title through fraud.

IAMI offers annual and regional conferences to further the training and knowledge of investigators working in the marine environment throughout the world. IAMI was founded in 1986 to organize and publish the Vessel Theft Investigators National Roster. The roster was intended to assist investigators combat marine crime, which is considered a high profit, low risk crime, by providing contact persons from various agencies involved in marine theft investigations.