Visitors to South Carolina’s highest peak will soon have access to a spectacular panorama of the surrounding countryside thanks to a $350,000 gift from Duke Energy. The contribution is the first step towards building an observation platform and other planned amenities at the top of Sassafras Mountain. The funds allow construction of the observation platform to begin.

The donation was formally presented Feb. 6 at the S.C. Natural Resources Board meeting in Columbia. Funding for the Sassafras Mountain amenities was committed as part of the Relicensing Agreement for Duke Energy’s Keowee-Toxaway Hydroelectric Project, which includes the hydroelectric stations at Lake Keowee and Lake Jocassee. 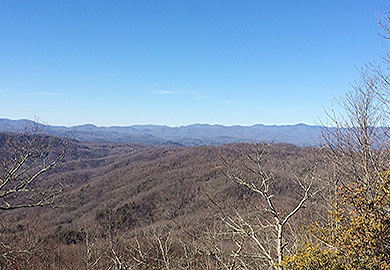 "Duke Energy has been a long-time partner with the S.C. Department of Natural Resources to provide public recreation since the 1960s," said Alvin Taylor, the agency’s director. "We have worked closely with Duke Energy on numerous projects involving hunting, fishing, boating and habitat protection. Building this platform is the first step in maximizing the natural beauty of the Palmetto State’s tallest peak for generations to come.”

"Sassafras Mountain is a special natural asset, and this project fits right in with our mission of environmental stewardship," said Clark Gillespy, South Carolina president of Duke Energy. "Partnerships like this ensure that the natural beauty and wonders of South Carolina are protected and shared with generations to come."

With the Duke Energy contribution, fund-raising for the Sassafras Mountain observation platform, which will allow views into North Carolina and Georgia, has reached about $500,000, sufficient to move forward with construction of the platform. Construction of the platform will likely begin this summer, and should take less than six months. The construction of other amenities, such as restrooms, a picnic area and a barrier-free trail to the observation platform will require additional fund-raising.

"We challenge other corporations to follow Duke Energy’s lead and join us in this effort, because the Sassafras Mountain project is important to the citizens of South Carolina," Taylor said.

Sassafras Mountain, in addition to being the highest point in South Carolina at 3,553 feet, sits on the border of South Carolina and North Carolina and is also on the Eastern Continental Divide. It is the separation point for three distinct watersheds—two of these watersheds drain into the Atlantic Ocean and another travels to the Gulf of Mexico. The 77-mile Foothills Trail passes over the top of Sassafras on its journey between Table Rock and Oconee state parks.

Partners in the Sassafras Mountain effort in addition to DNR and Duke Energy include Pickens County, Clemson University, The Conservation Fund, The Highpointers Club, the Foothills Trail Conference, and the Harry Hampton Memorial Wildlife Fund.