An estimated 50,000 hunters will take to the woods during the upcoming turkey season, generating an estimated $30 million in direct expenditures for South Carolina’s economy. The 2015 wild turkey season begins April 1 on private lands in 34 counties that make up Game Zones 1-5 and for all Wildlife Management Areas statewide where turkey hunting is allowed. The season opens March 15 on private lands only in Game Zone 6: Allendale, Bamberg, Barnwell, Beaufort, Berkeley, Calhoun, Charleston, Colleton, Dorchester, Hampton, Jasper and Orangeburg counties. The season closes May 1 throughout the state.

Saturday, March 28 is Youth Turkey Hunt Day in areas where the season opens on April 1. On this day, youths 17 and under who are accompanied by a properly licensed adult (age 21 and older) may hunt turkeys. Only the youth can take or attempt to take turkeys. Tagging requirements remain in place for this special youth day. 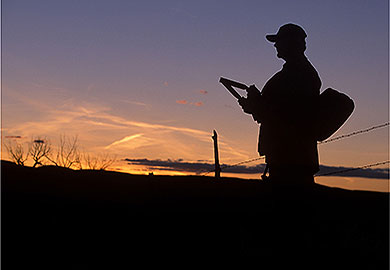 The outlook for the 2015 spring season is only fair for most areas, according to Charles Ruth, Deer and Wild Turkey Program coordinator for the S.C. Department of Natural Resources (DNR). This is based on recent turkey harvest and reproductive trends. Annually since the early 1980’s, DNR conducts a Summer Turkey Survey to estimate reproduction and recruitment of turkeys in South Carolina. The survey involves agency wildlife biologists, technicians and conservation officers, as well as many volunteers from other natural resource agencies and the general public.

“Reproduction in turkeys has generally been poor to fair for the last decade", said Ruth. "Last summer, average brood size of 3.9 poults remained relatively consistent and the total recruitment ratio of 1.6 was actually up over 20 percent from 2013. However, 2013 was the lowest recruitment ratio since the survey began in 1982, therefore, last summer’s modest increase is still below what is considered good. Recruitment ratio is a measure of young entering the population based on the number of hens in the population. This figure was driven by a high percentage of hens (59%) that had no poults at all by late summer. At the regional level it appears that with the exception of the lower coastal plain, reproduction was poor in most of the state last summer."

What does poor reproduction mean for the spring turkey hunter? Ruth indicated, “Spring harvest trends have followed the trends in reproduction in recent years so the outlook for the 2015 season is not terribly encouraging. Most hunters know that having an abundance of 2 year old gobblers typically leads to good hunting because they are generally more responsive to hunters’ calls than older more dominant gobblers. However, the record low reproduction in 2013 will not be felt until this spring because 2 year old gobblers in 2015 would have been hatched in 2013 and that simply did not happen in most parts of the state."

Also, the gobbler to hen ratio during last summer’s survey was 0.60 which is the lowest since the year 2000, said Ruth. "Low gobbler to hen ratios can affect the quality of hunting because hens are extremely available which affects gobbling and responsiveness to calling by hunters.”

“The bottom line,” Ruth said, “is the state’s turkey population is about 35 percent below record levels around the turn of the century. We need better reproduction for several years to get the population back up. That is the nice thing about turkeys though; given the right conditions they can naturally bounce back in a short period of time.”

For more information on wild turkeys including how to order turkey tags online, the 2014 Turkey Regulations, the 2014 Summer Turkey Survey or the results from the 2014 spring gobbler season, see the DNR website.