March Madness conjures up images of a feverish month of intense college basketball, but it also means recruiting for weather observation. It's a contest between all 50 states to see who can recruit the most new volunteers during the 31 days of March. 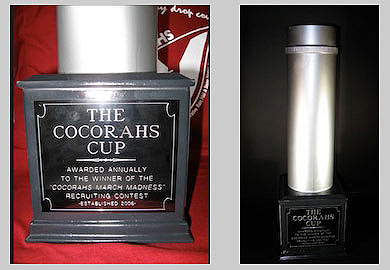 The Community Collaborative Rain, Hail and Snow Network, or CoCoRaHS for short, is always in need of a greater number of observations. Due to the variability of precipitation, amounts measured can be quite different only a block or two away. Help fill in the gaps during the contest. More observations mean a clearer picture and better understanding of where it did and did not rain.

In 2008, South Carolina brought home the cup and last year we tied for 6th for the Traditional count. This year has gotten off to a slow start, so sign up at the CoCoRaHS www.cocorahs.org website and help put the Palmetto State over the top.

The contest is broken down into two categories:

* Per Capita - or population weighted - the state that recruits the greatest number of new observers per one million of its total population.

The winning state in each category receives the "CoCoRaHS Cup" to keep and exhibit for a year until next year's contest (in the tradition of the NHL's Stanley Cup).

Everyone can help - young and old and in between. Here are the basic requirements for being a CoCoRaHS weather observer:

* Have access to the internet and the ability to browse the CoCoRaHS website, where you will enter your daily precipitation data.

* Have an official-type CoCoRaHS rain gauge. You can buy one inexpensively on our website.

* Have a good site on your property with good exposure, as free of trees and obstructions as possible; where you can place the rain gauge about five feet off the ground.

* Be willing to enter your precipitation data on a daily basis between 6 a.m. 9 a.m. through the CoCoRaHS internet web site.

What are the benefits of being a CoCoRaHS observer? Well, we don't offer a paycheck, but by participating in the CoCoRaHS network you will make an important contribution. Providing your daily precipitation data will assist in filling in a piece of the climate puzzle that affects all South Carolinians. CoCoRaHS also is a great way to learn more about weather while collecting valuable rainfall data.