The boardwalk at the Dungannon Plantation Heritage Preserve (HP) has been temporarily closed to protect nesting wood storks. The wood storks at Dungannon HP have been found to be extremely sensitive to human disturbance. The trails at Dungannon HP remain open for public use, and the boardwalk is expected to reopen after the nesting season has concluded, which is typically late summer. 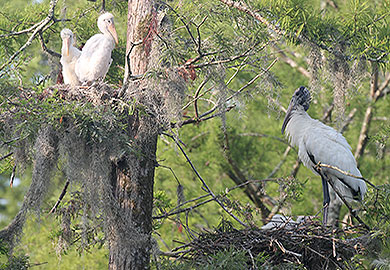 In 1984, wood storks (Mycteria americana) were listed as a federally endangered species after nesting pairs in the United States breeding population declined from between 15,000 and 20,000 in the 1930’s to 2,500 pairs by 1978. Thanks in part to the success of wood storks nesting in South Carolina, the species was reclassified as federally threatened during 2014. Historically, wood storks have used South Carolina as a post-nesting foraging area during the summer and fall. In 1981, the first successful wood stork nests were documented in South Carolina (11 nests). Currently, there are approximately 1,500 – 2,500 wood stork nests in South Carolina each year. Christy Hand, S.C. Department of Natural Resources (DNR) Wildlife Biologist, reported a record high of 263 stork nests at Dungannon HP during 2014. The storks nested successfully, and an average of 2.2 chicks fledged per nest. More information about the 2014 nesting season can be found on the DNR Wading Bird Project website

The Dungannon Plantation Heritage Preserve offers excellent habitat for many migrating and breeding songbirds and a variety of native wildflowers including large stands of wild Easter lily and five species of orchids. Dungannon HP is about 17 miles south of Charleston on SC Highway 162, four miles from the turn-off from US Highway 17. The management road system provides easy walking through open hardwood forest. No motorized vehicles are allowed. The preserve is open seven days a week during daylight hours.

People who are interested in viewing nesting wood storks are encouraged to visit the Donnelley Wildlife Management Area in Green Pond. Nesting wood storks can be observed from a safe distance from the dike near the office.