July 16, 2015All of South Carolina now under drought status

The S.C. Drought Response Committee, meeting via conference call on July 16, has upgraded the drought status of the entire state. Previously on June 19 the committee had designated 28 counties to the first level of drought. Those counties are now in the second or moderate stage of drought. 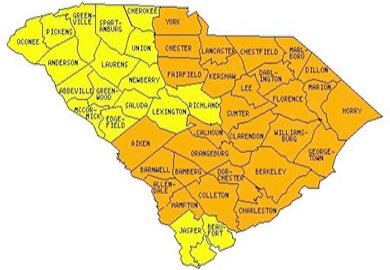 The purpose of the moderate declaration is to increase awareness that drought conditions are intensifying. Water systems are asked to review their Drought Response Plans and Ordinances and implement as needed.

“It’s clear that drought is affecting folks all across the state. Irrigation has helped provide moisture to some crops, but it doesn’t replace a good soaking rain," said S.C. Department of Agriculture Commissioner Hugh Weathers. "This summer’s weather furthers illustrates the partnership that farmers have with Mother Nature. The short-term forecast isn’t optimistic, but we’ll continue to pray for relief from the heat and drought.”

“Due to below normal rainfall over the past several months, streamflow levels have dropped considerably and are well below normal for this time of year," reported Scott Harder, S.C. Department of Natural Resources hydrologist. "These low streamflows have caused small but steady declines in most of the state’s major reservoirs and most of the reservoirs are currently below their target levels.”

Bobby Brock with the Marlboro Water Company and Northeast Drought Committee said, “Several farmers in Marlboro County agree that the combination of hot weather and lack of rainfall is having an impact on their farming operations, particular those without irrigation. It certainly has affected the corn crop and will impact peanuts and soybeans if we do not get rain soon.”

According to Hope Mizzell, SC State Climatologist, “Rainfall totals within each county are highly variable, for example in York County some areas are reporting less than 2” since June 1 while others have received over 7”. Since our last Drought Committee meeting in mid-June, rainfall totals have decreased statewide. The drought impacts have been intensified due to the much above normal temperatures."

Drought Response Committee Chairman Ken Rentiers stated, "The Committee will continue to monitor the situation closely and if conditions deteriorate the S.C. Department of Natural Resources will reconvene the committee as needed.