Botany Island, a private island protected by a conservation easement, sits at the mouth of the North Edisto River. The property’s owners and caretakers have been strong partners in DNR’s stewardship of sea turtles along the island’s beaches. 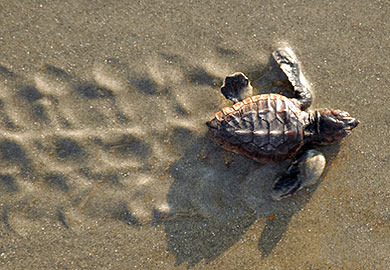 “We are thrilled that the first nest and emergence this year occurred on our beach,” said Maggie McCartney and Will Wannamaker, who make up the island’s management team. “It is truly a remarkable experience to be a part of the [loggerhead’s] survival plan in the wild. We look forward to many more successful hatchings in the months to come.”

With nesting season over halfway complete and hatching season officially underway, biologists are forecasting a banner year for sea turtles. As of July 7, DNR volunteers and staff had reported 3,653 loggerhead nests, one leatherback nest, and one green nest along South Carolina beaches.

“The preliminary statewide estimate for South Carolina this year is expected to surpass our 2013 record year,” said biologist Michelle Pate, who coordinates DNR’s sea turtle program, which is responsible for managing and protecting sea turtles in the state of South Carolina. You can continue to follow nesting and hatching in real time on our online nest monitoring system.

With the arrival of hatching season, the support of South Carolina coastal residents and visitors is crucial to keeping “Lights Out for Loggerheads,” Pate said. When sea turtle hatchlings emerge from the nest, they are attracted to the blue and green wavelengths of light naturally reflected off the ocean. They use this natural light to navigate from their nest towards the ocean. If an artificial light source on the beach is brighter than the natural light of the ocean horizon, hatchlings will head towards the artificial source, a process known as disorientation.

Disoriented hatchlings that crawl away from the ocean and toward bright artificial lights are more vulnerable to predators and exhaustion.

You can help by turning out all lights in your house that are visible from dusk to dawn along the beach during the months of May through October. Closing blinds and drapes on windows that face the ocean also reduces light pollution on the beach. Learn more about Lights Out for Loggerheads.

Civil penalties for harming a threatened or endangered species such as sea turtles can reach $25,000. County and local lighting ordinances also exist to protect sea turtles, and residents and visitors are encouraged to familiarize themselves with their local laws. Violating local or county lighting ordinances can carry fines up to $500.

This year may also bring a record number of sea turtle strandings, or sick, injured, and dead sea turtles. Sea turtle stranding responses and necropsies (post-mortem examinations) are an important aspects of DNR’s sea turtle program. There have been 98 sea turtle strandings in South Carolina to date this year, 31 of which stranded alive. Strandings have averaged about 128 sea turtles per year since 2000. Sick or injured live turtles that strand along the coast are retrieved for rehabilitation, while dead turtles are necropsied to assess possible cause of death (disease or injury) and to collect information on food habits and gender. Eleven necropsies have been performed by the DNR staff (6 loggerheads, 2 green, 1 leatherback and four Kemp's ridleys) this year. To keep up with strandings in South Carolina, visit the online stranding database.

How you can help sea turtles in South Carolina:

* Do not shine lights on a sea turtle, including cell phones and flash photography

* Turn out all exterior lights (flood and deck) visible from the beach, dusk to dawn, from May through October

* When boating, lookout for sea turtles both inshore and offshore

* Fill in large holes dug on the beach at the end of the day, as adults and hatchling sea turtles can become trapped in them