July 2, 2015Share the beach with shorebirds this holiday weekend

Fourth of July weekend means family, friends, and good food – and for thousands of visitors, the holiday means beautiful beaches, too. If you’re one of the many who will be celebrating on South Carolina’s coast this Independence Day, please keep an eye out for our beaches’ full-time, feathered residents.

South Carolina Department of Natural Resources (DNR) biologists are asking the public to be mindful of beach-nesting birds, whose chicks remain on the beach this time of year before they fledge. Fourth of July marks one of the busiest weekends of the year on South Carolina beaches, and the holiday falls during a vulnerable period for many of the state’s seabirds and shorebirds. 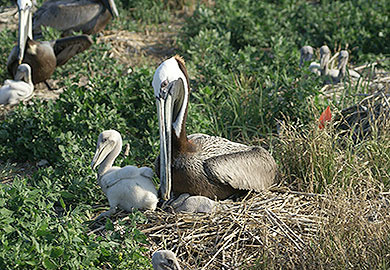 "This time of year, many of the seabird and shorebird nests have hatched, and their small chicks are running around, using the intertidal zone to feed and keep cool," said wildlife biologist Janet Thibault. “Their chicks are small, camouflaged, and difficult to see, making them easy to trample and vulnerable to overheating and predation."

So far, 2015 is shaping up to be a successful breeding season for these birds in South Carolina, biologists report. In places such as DNR Seabird Sanctuaries and Cape Romain National Wildlife Refuge, thousands of least tern, royal tern, sandwich tern, and brown pelican chicks are visible flocking on the beach with their parents.

Hatching success may have been high this year because the coast has seen favorable weather, with no large storms or strong winds this summer. Overwash of nests by high tides is a leading cause of nest failure, especially in the spring and early summer, when hurricane season begins. Newly hatched chicks face an even greater host of challenges, though. Chicks need to eat enough, dodge predators, and stay cool to survive to fledging age, which is about a month after hatching for most of the terns and plovers. Brown pelicans have the longest chick-rearing period, with young fledging about three months after hatching.

As development and erosion change the coastal landscape, South Carolina’s seabirds and shorebirds have fewer undisturbed places to feed, rest, and raise their young. Learning to share the beach with these animals will help beachgoers ensure that terns will dive in the surf and pelicans fly gracefully overhead for many generations to come.

Quick Tips for Sharing the Beach:

* Avoid disturbing congregations of birds, which forces birds to fly and use up energy they need for nesting and migration.

* Observe these animals from a distance; if the birds leave the ground, you’re too close!

* Keep the beach clean and do not feed wildlife. Food scraps and litter can attract predators and entangle birds.

* Respect leash laws and keep pets leashed near nesting areas; even well-behaved dogs appear as a threat to seabirds and shorebirds.