In January and February 2015, S.C. Department of Natural Resources Region 2 Unit A participated in the Appalachian Eagle Survey. Staff conducted a Golden Eagle survey at Marsh Wildlife Management Area (WMA) in Gresham, South Carolina to determine the presence or absence of Golden Eagles. The survey was part of a larger survey conducted across the eastern United States by Dr. Todd Katzner of West Virginia University and Kieran O’Malley and Rich Bailey of the West Virginia Division of Natural Resources. 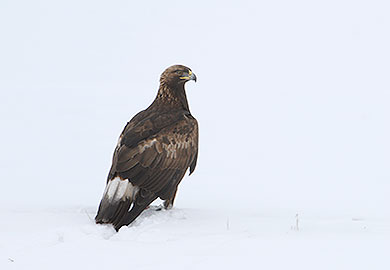 Golden Eagles are North America’s largest bird of prey. With wingspans in excess of 6 feet and diving speeds of more than 150 miles per hour, these birds are quite impressive. Past researchers have assumed that Golden Eagles were rare vagrants in South Carolina, with wintering eagles staging further north in the higher elevations of the Appalachian Mountains. The Appalachian Eagle survey continues to demonstrate that, with well-placed bait, golden eagle sightings are much more common than thought in South Carolina and other southeastern states. This study has helped develop a more solid understanding of the true distribution of golden eagles in eastern North America.