"Sam Stokes is truly a living legend among wildlife biologists in the Palmetto State and also among everyone in the South Carolina conservation community," said Alvin Taylor, director of the S.C. Department of Natural Resources (DNR) "Among his most notable achievements is that he played an integral role in the protection of the Jim Timmerman Natural Resources Area at Jocassee Gorges."

Stokes, a Pickens native, graduated in 1962 from the University of Georgia with a degree in forestry with a wildlife concentration. His first job with DNR (then the S.C. Wildlife and Marine Resources Department) was in September 1963, when he was hired as a wildlife biologist in 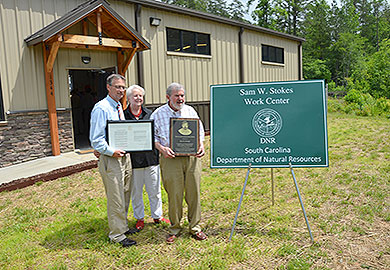 Union. He came to Clemson in June 1965, where he remained until his retirement in 2004. For much of his career, Stokes was the leader of the state's Black Bear Project, and he was instrumental in the re-establishment of deer and turkeys in the mountains of South Carolina.

Stokes was a mentor for many Clemson University students who went on to become DNR wildlife biologists, according to DNR Director Taylor.

"Sam had a tremendous impact on natural resources protection in South Carolina," Taylor said. "The Jocassee Gorges land protection project was a result of his developing a relationship over the years with Duke Power and Crescent Resources. He was the leader of the state's Black Bear Project and research effort, and partnered with Duke and Clemson on some of the most important black bear research efforts in the state. He also developed a great partnership with the U.S. Forest Service, the largest landowner in the Wildlife Management Area program, and that's an incredibly important partnership."

Emily Cope, DNR director of wildlife and freshwater fisheries, said Stokes' 41 years with the state wildlife agency "reflected his love for the wildlife resources and for the mountain area where he spent most of his life. His dedication and love for the job was instrumental in the protection of much of the mountain region, including Jocassee Gorges as an outstanding wildlife and natural area--an area that is recognized nationwide."