They bleed blue blood, scavenge the seafloor with 10 eyes, and are most closely related to spiders and scorpions.

Horseshoe crabs may look alien, but they’re an indispensible part of both the medical world and coastal food webs across the globe. They’re also spawning in South Carolina until July, affording S.C. Department of Natural Resources (DNR) biologists and the public a chance to learn more about an animal that appeared on Earth long before the dinosaurs. 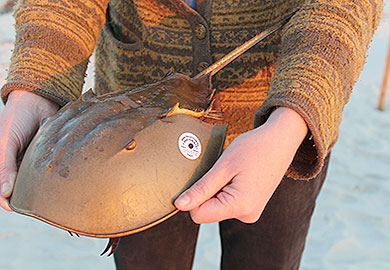 Want a closer look? Check out the SC Aquarium in Charleston this Saturday, May 16, when DNR biologists will be collecting horseshoe crabs from the shoreline adjacent to the Aquarium, tagging them, and answering your questions. This live event is open to the public and runs from 9 a.m. to 1 p.m.

Horseshoe crabs come ashore en masse during spawning season to lay and fertilize eggs. The crabs appear in greatest numbers under the tides of full and new moons, laying their eggs where they’ll stand the best chance of survival.

These tiny, greenish eggs are packed with nutrients that sustain enormous flocks – and at times even entire species – of shorebirds. The survival of the red knot, a federally threatened shorebird, depends upon a plentiful supply of horseshoe crab eggs along their migration route, which can extend from the tip of South America to the Arctic.

Horseshoe crabs can be a lifeline for humans, too. If you’ve ever received a flu shot, you’ve benefitted from the biology of these unusual creatures. A test derived from their blood remains the best tool doctors have for checking the safety of injectable medicines and implantable medical devices. That means every tetanus shot administered and pacemaker implanted is first tested for bacterial contamination using an extract from horseshoe crab blood.

The horseshoe crab’s ecological and medical significance makes understanding and protecting the species a priority for DNR. For over fifteen years, DNR biologists have participated in a national tagging program, affixing plastic disks with unique numeric codes to the shells of hundreds of horseshoe crabs so their movements can be better tracked.

“In collaboration with the United States Fish and Wildlife Service, DNR has tagged over 9,000 HSC since 1997,” said marine scientist Dr. Amy Fowler. “Over the past year, we’ve conducted mark-recapture tagging studies, egg surveys on known spawning beaches, and the start of a population genetic assessment.”

Last summer, a pilot study analyzing genetic samples from 100 St. Helena Sound horseshoe crabs indicated the crabs belonged to a relatively large and diverse population. DNR biologists will continue that work at the statewide scale this summer to determine if significant genetic differentiation exists between horseshoe crabs of separate estuaries along the coast of South Carolina.

Horseshoe crab numbers have seen a steep decline across much of the eastern seaboard, due in part to their popularity as bait for eel and whelk fisheries. South Carolina only allows harvest for biomedical and educational purposes; biomedical permit holders temporarily collect and extract blood from horseshoe crabs before returning them to South Carolina waters.

You can help horseshoe crabs by reporting tagged crabs (call 1-888-546-8587 or online) and overturning stranded individuals you encounter on the beach. Wave action can flip horseshoe crabs onto their shells as they come ashore to mate and lay eggs, killing many adults each year. By turning stranded horseshoe crabs over (grabbing by the tail can injure these animals), you can save a life and help ensure the health of their population in South Carolina.