Black-bellied whistling ducks, having recently expanded their range into coastal South Carolina, are being fitted with colored leg bands to learn more about their distribution and movement across the Southeast.

First reported in South Carolina in 1994 at Donnelley Wildlife Management Area in the ACE Basin area of Colleton County, this brightly marked waterfowl species has been expanding its range from central Texas into the Southeast for the past 25 years.

The long-necked birds have black undersides, pink bills and large white wing patches noticeable in flight. They often perch in trees or stand in shallow water. 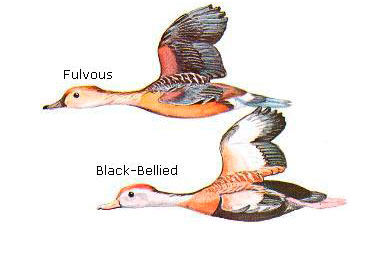 Beginning in 2014, biologists with the S.C. Department of Natural Resources have placed over 100 blue leg bands on wild black-bellied whistling ducks. Waterfowl biologists in six states are participating in the banding program using different colored bands: blue in South Carolina, orange in Florida, light green in Georgia, yellow in Louisiana, green in Texas, and white in Mississippi.

The birds prefer shallow freshwater lakes and ponds, usually with cattails and water lilies, and have nested in the state since 2003. They nest both on the ground and in cavities in trees.
Now common in the state's coastal areas during the summer and early fall, banding recoveries suggest that they migrate to Florida during the winter.

Anyone sighting a black-bellied whistling duck with a colored band on its leg should report it to www.reportband.gov.