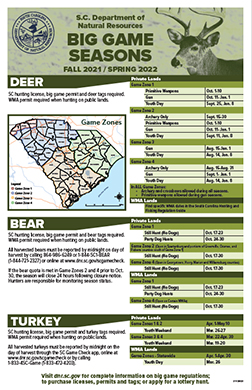 Description
Black bears are the largest land mammals in South Carolina. They are covered in a long thick fur that can vary in color. The most common color phase is black or dark brown with light brown snout. They have a broad head with rounded ears set well back on the head. The rump of a black bear is higher than the front shoulders, and they do not have the prominent shoulder hump of the Grizzly and Brown bears. They have good eyesight and an incredible sense of smell. Black bears are excellent climbers and good swimmers and can be found in a variety of habitats.

Average Size
Male black bears are generally larger than females. An average adult male black bear can weigh between 150 - 350 pounds while the female averages between 100 -250 pounds. However, when food is plentiful, older bears have been documented at weights above 400-500 pounds. The largest black bear recorded in South Carolina was 609 pounds.

Life Expectancy
The average life expectancy is 18 years in the wild. Black bears reach sexual maturity by 3 years and obtain most of their growth by 5 years.

Preferred Habitat
Typically, black bears require large expanses of forest dominated by a diversity of mast-producing hardwoods and shrubs intermixed with early successional vegetation such as blackberries, pokeberries, etc. Wetlands such as swamps and bays also provide good habitat. However, black bears are adaptable. As long as they can find adequate food sources and have suitable den sites, black bears can be found in a variety of habitats.

Black bears can be found throughout North America. In South Carolina, there are two resident populations of black bears, one in the mountains and upper piedmont and one in the coastal plain. Home range for bears must include den sites, food, water and cover for adults and young. Typically male bear home ranges can be 18 to 160 square miles, while home ranges for females are smaller, around 6-19 square miles. A shortage of natural food sources and lack of rainfall can cause home ranges to vary greatly. Black bears will travel large distances to find adequate food sources. In addition, juvenile bears, especially the males, must disperse to find new home territories. Dispersing juvenile bears have been sighted in many counties in South Carolina. These bears are usually transient and do not stay in the area for long.

Black bears are opportunistic and will feed on whatever is readily available. Their natural diet consists of berries, nuts and plant matter (over 80 percent) as well as insects and meat (less than 20 percent). Bears use their incredible sense of smell to find alternative food sources such as garbage, bird feeders, outdoor pet food, agricultural crops, etc., which can result in them becoming nuisance bears.

Black bears reach sexual maturity by 3 years of age. Peak mating season for bears is June and July. Males are territorial and will mate with as many females as they can. Young males are often driven away from their home territories by larger males during breeding season. Once the female is bred, she will turn her attention to feeding frequently and building fat reserves. Gestation is 235 days and cubs are born in January or February while the female is hibernating. Litters usually consist of two to four cubs. Cubs are dependent on their mother for food and protection until they reach 18 months of age.

Some of the files above are provided in the Adobe® Acrobat® (PDF) format. Adobe® Reader® is required to open these files and is available as a free download from the Adobe® Web site.