During 2015, the S.C. Department of Natural Resources (DNR) banded 59 wood stork chicks with field-readable bands, bringing the total number of wood stork nestlings banded in South Carolina to 202. The bands used in South Carolina are orange with black numbers and are placed on the upper right leg. Several other color combinations are being used for other projects. Researchers throughout the southeast are banding storks as part of a collaborative project to learn more about their movements, demography, and longevity. 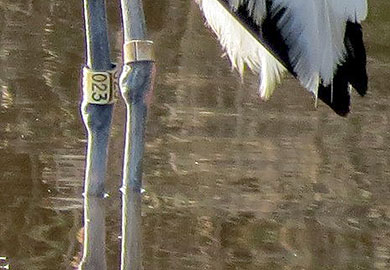 “Last fall, while I was at an impoundment managed by DNR I resighted a wood stork with a faded yellow band. I learned that it had been banded 20 years ago in Georgia and was one of the oldest wood storks that have been recorded,” said Christy Hand, DNR Wildlife Biologist.

The banded chicks have fledged (learned to fly) and are dispersing as they search for food. Young storks are vulnerable to starvation as they learn to feed themselves efficiently, so it is particularly important not to disturb groups of wading birds that are feeding in impoundments during the fall. Please do not disturb birds to read band codes.

If you see wood storks, you can check to see if they have bands by looking at their upper legs. Some storks have multiple bands, but typically only one of the bands has a code made up of numbers and/or letters. If you see a banded stork, you can contribute to this project by recording the following information: 1) color of band, 2) color of engraved code, 3) code, 4) location of band on stork – which leg, 5) color and location of any additional bands or transmitter on stork, 6) location where stork is located.

Please report any sightings of banded wading birds to DNR at wadingbirds@dnr.sc.gov and also to the Bird Banding Lab or 1-800-327-BAND. We often can provide information about where and when the bird was banded.

Satellite transmitters are also being used by researchers to answer a variety of management questions about wood storks. Nine wood storks were outfitted with transmitters at the Washo Reserve in South Carolina last year. You can learn about their travels on the Wildlife Tracking website. The telemetry project is a collaborative effort let by University of Florida and Savannah River Ecology Lab biologists.

For more information about storks and other wading birds in South Carolina, please see the DNR Wading Bird website.