The S.C. Drought Response Committee, meeting via conference call on Jan. 15, removed the incipient drought declaration statewide. According to Hope Mizzell, South Carolina State Climatologist, “Since many counties were just on the cusp of drought when the Committee upgraded in late November it didn’t take excessive rainfall statewide to end the drought. Rainfall totals over the last 30 days (December 15- January 14) ranged from near normal at places like McClellanville (4.14”), Florence (4.39”), and Sumter (4.25”) to much above normal at Hemingway (10.01”) and Winnsboro (9.23”)." 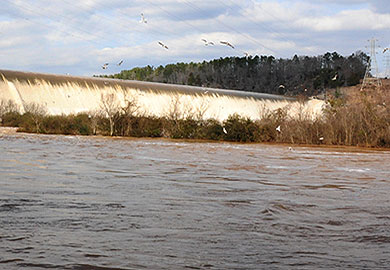 According to Scott Harder, S.C. Department of Natural Resources Hydrologist, “Streamflow levels across the state have increased significantly over the past two months and most gauging sites are at or above normal levels for this time of year. Reservoir levels in the Savannah basin have improved and are much closer to target levels as compared to levels observed a few months ago. Most other major reservoirs in the state are near or above their target levels as well.”

Darryl Jones, with SC Forestry Commission reported, “In the last few weeks, rainfall has been frequent enough to keep fine fuel moistures elevated, and the number of wildfires has been low. As we move into February, March, and April, we will begin to see periods of dry weather that are typical this time of year, and we are expecting to have an average wildfire season. Since most of the wildfires in South Carolina are human-caused, we encourage everyone to be careful. Escaped backyard burns lead to about 50% of the wildfires we respond to each year."

The Committee reviewed the drought levels based on various local or regional drought plans such as the US Army Corps of Engineers Drought Contingency Plan and Duke Energy’s Low Inflow Protocols. According to Ed Bruce, Duke Energy, “Savannah River reservoir conditions have improved. The US Army Corps of Engineers reservoirs remain in Level 1 with storage just below target. Keowee-Toxaway reservoirs have improved to Stage 0 with storage about 19 percent below normal. There are no drought conditions for the Catawba-Wateree River reservoirs.” While the SC Drought Response Committee has downgraded the drought, the U.S. Army Corps of Engineers and Duke’s Drought Management Plans remain in effect.