Private landowners cooperating with the S.C. Department of Natural Resources hosted 10 special youth deer hunts in the Upstate during 2014, introducing hunting to a new generation of sportsmen and sportswomen.

"As our older generation gets too old to hunt or passes away, today’s youth must be available to take their place," said Gerald Moore, S.C. Department of Natural Resources (DNR) wildlife biologist. "With a trend of declining youth participation over time, hunting could very well die a 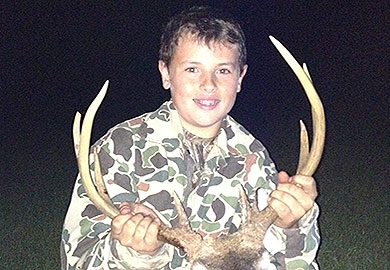 natural death from lack of interest. If hunting is to survive as we know it now, more non-hunting youth need to be exposed to hunting. The goal of these youth deer hunts is to show more youngsters who do not have a hunting connection or have limited hunting opportunities that deer hunting is an exciting, challenging and fun sport. We want to give more youth an opportunity to try hunting and see if it is something they may like and want to pursue. The hosts of these special youth deer hunts are doing their part and are making a meaningful contribution toward helping to ensure the future of our hunting tradition."

These youth hunts were conducted in Cherokee, Laurens, Spartanburg and Union counties, and there was no cost for youth to attend these special hunts. Sixty youth attended the hunts, and eight deer were killed. The hosts accommodating youth deer hunters on their properties during 2014 were:

All the youth hunts were conducted on Saturday afternoons. Youth attending these hunts must be 17 years of age or under and must be accompanied by an adult. Young hunters are selected for these hunts because they generally have no one to take them hunting or because of their limited hunting experience.

ATDO Ministries provides a brief devotion and a barbecue lunch at each hunt. Firearms safety, deer biology, sportsmanship and ethics are discussed prior to going to the rifle range, where each youngster shoots their firearm. Youngsters get into their deer stand with their parent or whoever brings them to the hunt by mid-afternoon, and they hunt until dark. Most of the youth who take a deer at these hunts indicate that it was their first deer.

"In the South and most rural regions of our country, hunting is a long, established tradition," said Moore, "and it’s difficult for many of those people to imagine that hunting could ever end. However, today only about five percent of the nation’s population buys a hunting license.

Hunters as a group are a very small minority, and fewer young people are getting into hunting each year. Many youth that grow up in urban areas or in non-hunting families may never have an opportunity to experience the thrill and excitement that hunting can offer."