Gerald Moore, longtime wildlife biologist with the S.C. Department of Natural Resources, was recently honored for his work with mobility impaired hunters.

Moore, a 40-year veteran with the S.C. Department of Natural Resources (DNR), is based in Union. He was the agency's first white-tailed deer biologist and is a graduate of the University of Georgia.

Years ago, Moore started a series of hunts for mobility impaired hunters in the Upstate. By fall of 2015, the hunts had grown to four days, five counties and to more than 60 well-managed and exclusive, private tracts of land in the Upstate. 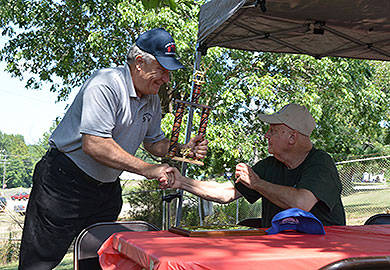 "It is a testament to Gerald Moore's hard work and determination that we have these wonderful hunts," said Richard Morton, DNR regional wildlife biologist for the Upstate. "Over the years, Gerald has worked with mobility impaired hunter groups and with landowners to give them the opportunity to hunt deer on some of the most well-managed and exclusive properties in the Upstate. Gerald has also given these hunters the opportunity to develop friendships and fellowship among those who have similar disabilities."

In accepting the award, Moore pointed out that the hunts would not be possible without the assistance of numerous groups, including the Harry Hampton Memorial Wildlife Fund, Georgia Pacific Corp., Carolina's Fence Association, South Carolina Disabled Sportsmen, Paralyzed Veterans of America, Sprinkle Prosthetics, the USMC Wounded Warrior Regiment, South Carolina Wildlife Law Enforcement Officers Association and the South Carolina DNR's Take One Make One program. There are also a significant number of volunteers whose individual personal assistance is vital to the success of these events.