With a little luck and a head start in the lab, tiny red drum being released into South Carolina waters could become “bull reds” one day.

The S.C. Department of Natural Resources (DNR) has nearly concluded its annual release of young red drum and spotted seatrout into estuaries along the South Carolina coast. The program aims to increase the numbers of these native fish, which are two of the most popular species among recreational anglers in the state. 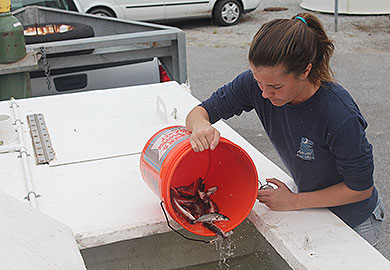 “We’ve released about one million small juvenile red drum and spotted seatrout in South Carolina coastal waters this year, a little more than 600,000 red drum and more than 300,000 spotted seatrout,” said Karl Brenkert, DNR wildlife biologist. “We know from previous years’ stockings that this number of fish can make a significant contribution to the wild population.”

The stocking process begins when wild adult red drum and spotted seatrout are captured in Charleston-area waters and transported to the lab at DNR’s James Island campus. Once at the lab, the adult fish are held in specialized tanks that mimic the natural conditions under which the fish mate and spawn. Eggs produced in these tanks are incubated and hatch within 1-2 days. The resulting larvae are stocked into outdoor nursery ponds at the Waddell Mariculture Center in Bluffton, where they’re raised to a size of 1-2 inches before being harvested and stocked in South Carolina’s coastal estuaries. The adult fish are returned to the waters from which they were collected.

Genetic analysis has transformed the way DNR conducts fish stocking research, and biologists now collect genetic samples from all red drum and spotted seatrout that are captured during regular sampling research. Analysis of these samples allows staff to both track the genetic health of the overall population and even keep tabs on how hatchery-raised fish fare once they’re released into the wild.

“DNR’s stock enhancement team is one of the leaders in the field of responsible stocking programs by using cutting edge tools in our research,” said Tanya Darden, assistant director of DNR’s Marine Resources Research Institute. “Our program plays a key part in the effective management of our resources by providing important information about natural populations as well as contributing to them.”

Over decades of stocking research, DNR biologists have learned which sizes of released fish contribute most effectively to the wild population. This size can differ by location, depending on the physical characteristics of the estuary. By matching the right-sized fish to the right location, the marine stock enhancement program is able to provide a boost to wild populations, allow more fish to reach adulthood, and help provide high quality angling experiences along the coast.