The 2015 shrimp-baiting season will open at noon on Friday, Sept. 11 in South Carolina waters. 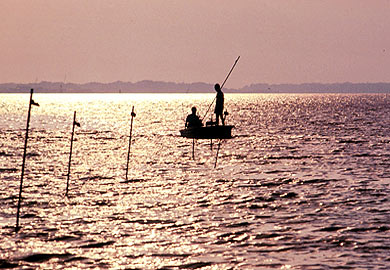 After a strong spring spawn and a season of good environmental conditions, DNR biologists are optimistic about the fall shrimp season.

The shrimp-baiting season lasts 60 days. Resident licenses cost $25, and nonresident licenses cost $500. Licenses may be applied for online (https://dnrlicensing.sc.gov/) or by phone (1-866-714-3611). The catch limit is 48 quarts of shrimp measured heads-on (or 29 quarts heads-off) per boat or set of poles per day, and each boat is limited to a set of 10 poles. When taking shrimp over bait, no cast net may be used having a mesh smaller than one half-inch square measure or one-inch stretch measure.

Post-season mail surveys conducted every year since 1988 indicate that recent total catches have been less than 1 million pounds per season (heads on) after peaking at more than 3.6 million pounds in 1997. Despite the decline in total catch, catch per trip has remained relatively stable, averaging about 20-22 quarts per trip since 2001. The stable catch-per-trip suggests that shrimp abundance has remained relatively good, but fewer licenses and shrimping trips are resulting in a lower overall harvest. DNR biologists recommend that in general, shrimpers should target areas closer to the ocean to avoid smaller shrimp.

DNR law enforcement officers advise baiters not to have bait or poles in a boat that is in the water before noon on Friday, Sept. 11. The public is asked to report violations of saltwater recreational and commercial fishing laws by calling the Coast Watch hotline number (1-800-922-5431) toll-free, 24 hours a day.

Recreational and commercial shrimpers are encouraged to report catches of tiger shrimp in South Carolina to DNR at tigershrimp@dnr.sc.gov. If possible, reports should include a photograph of the animal along with location and date of capture. Specimens less than 5 inches in length are of particular interest and should be kept frozen prior to donation.