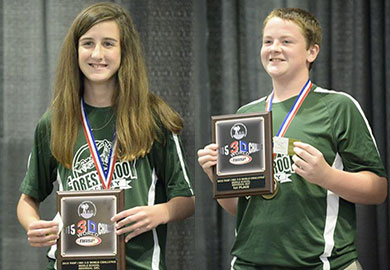 The S.C. Department of Natural Resources will hold the 2015 SC NASP/IBO 3D Challenge on Oct. 24, in Lexington. National Archery in the Schools Programs joined forces with IBO to create a format, which will be familiar and inviting to current NASP students in grades 4-12. NASP kids will sign up to compete on multiple ranges each containing six North American game animal targets. The targets will be placed in front of a diagonal backstop curtain 10-15 meters from the shooting line. These are the same distances students shoot in NASP tournaments. Instead of normal 3D scoring zones, these special targets will feature custom scoring rings equal to the size and shape of the 7, 8, 9, and 10 rings on NASP bull's-eye targets. The kids will know they are shooting the same size targets at the same distances as they have grown accustomed to in NASP. Archers use the same NASP bows, arrows and accessories they use in target archery.

The tournament will be open to any current South Carolina NASP school. Teams and Individuals will be competing for prizes. If you are interested in more information about the National Archery in the Schools Program, contact Sgt. Ryan Bass at (803) 609-6815, bassr@dnr.sc.gov.